Allapu/allapo is a generic (kankanaey) term in the Philippine Cordillera meaning grandparent or ancestor.
Apu/apo is the same term in other ethnic groups and is also the spoken word in Mainit.

When I was a child living in the barrio, I used to look forward to visits from my apos. Not least because of the food items they always brought with them, and they would always bring the finest from their kitchen and from elsewhere, but also because of the pearls of wisdom and lessons from their stories and tales of sang-adum.

This tradition continued as we were growing up, through to starting school. But throughout the rest of primary school and high school years in the capital town of Bontoc, I always looked forward, during vacations and school breaks, to visiting my grandmother, and the many aunties and uncles and cousins in the village. (Mainit is a lazy 3-4 hour hike from Bontoc). 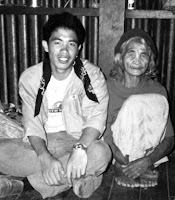 I remember one day, quite vividly, she was saying something ( i was never very attentive to my elders)-

My rough translation of these words:
"Come now child and hear what my apos used to say
And that you heed the words:
The food from your sweat is sweetest, no matter how little, no matter how simple or humble.
Yet though lavish or extravagant a banquet or feast that is thieved,
is bland and bitter, and will make you sick."

Apo never went to school
but she is as wise as a biblical sage.

Let us heed these words as we partake of the fruits of our labor,
or share in stolen goods...

And know too that thieves may be lurking in an alley,
or lording it in high office...
Posted by Igorotoz at Thursday, December 23, 2010 2 comments:

Email ThisBlogThis!Share to TwitterShare to FacebookShare to Pinterest
Labels: Stories from Apo

My, hasn't time flown! I thought my last blog was only a couple of days ago, but it’s been a couple of weeks. Well, whilst i think of something to do, so i can write a blog about it, here’s some more reading ideas to distract you. Oh and also some music. And don’t forget the DVDs. All good.

Nelson Mandela. Conversations with Myself. Mandela tells his story through his correspondences, journals, speeches, diaries and various drafts. He even mentions Luis Taruc's 'Born of the people' when he (Mandela) was training as a guerilla leader in Ethiopia.

Margaret Atwood. Curious Pursuits is non-fiction. And so is A Critical Companion. For her fiction check out below. 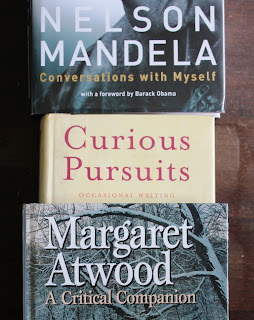 Brian Greene. The Fabric of the Cosmos (the dark-spined book in the pile) is the follow-up to The Elegant Universe. The book zeroes in on space and time, and reality. It is written with the general reader in mind. It has lots of interesting stuff to help understand the various concepts of cosmology and the universe.

Tony Blair writes his memoir in A Journey. It is honest and candid but he spends too much time defending the actions of his government especially on Iraq. There’s some porky pies in there too. 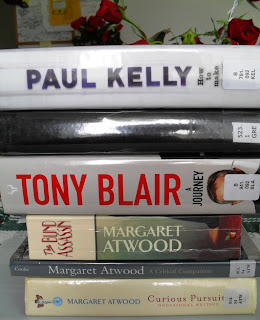 It is said that retired politicians are more concerned with keeping secrets than with telling them, as in Tony Blair above. This is quite true with Australia's John Howard. Lazarus rising. 'Lazarus' in the title is reference to his political cunning coming back from electoral defeat three times as opposition leader, to becoming the second-longest PM of Australia. He is a realist but very hardnosed to see where he got things wrong. He is always quick to take credit and to bask in glory, but reticent and slow to acknowledge responsibility for wrong decisions. He advised against his MPs indulging in hubris and arrogance, but that's exactly what led to him becoming the second sitting Australian Prime Minister, to lose his seat in an election duly won by Labor under Kevin Rudd.

In Confessions of a Faceless Man. AWU (Australian Workers' Union) head Paul Howes relates his role in the the fall of Kevin Rudd as Labor leader and PM. 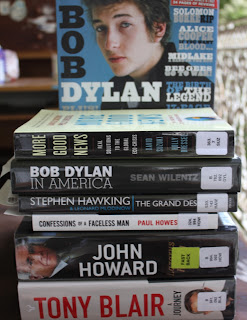 The Grand Design. Stephen Hawking (with Leonard Mlodinow) continues to seek answers for the questions that humans still don’t know, and presents the most recent scientific thinking about the mysteries of the universe.

More Good News. David Suzuki and Holly Dressel provide inspiring stories of real solutions to the problems besetting the planet. They write about the many people and organisations (and cooperatives) that promote and enact real green change everyday.

Sean Wilentz. How various events such as the assassination of President McKinley and McCarthyism, helped mold Bob Dylan in America and turn him into such a significant cultural and literary figure.

Luka and the fire of life. This book is for younger readers. It is more thrilling than a harry potter or the lord of the rings. It is also instructional in the sciences and is populated with delightful wordplay from the witty and great storyteller Salman Rushdie. Here’s a passage-


The big bang? Or some other bang i don’t know about? There was only one Bang, so the adjective big is redundant and meaningless. The Bang would only be Big if there was at least one other Little or Medium-Sized or even Bigger Bang to compare it with, and to differentiate it from.

I am now on the hunt for the previous book Haroun And The Sea Of Stories. How I missed this I don't really know. 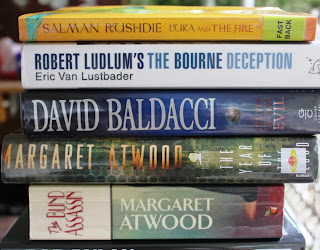 Margaret Atwood is also in the pile with The year of the flood and The Blind Assassin.

And then there’s the latest of Lustbader’s continuation of Ludlum’s The Bourne (fill-in-the-blank). Christopher Hitchens in Hitch-22 relates an anecdote about a  gathering where he and Salman Rushdie, Martin Amis and others, played some game about book titles, naming the Bourne books with Ludlum as the Bard eg The Elsinore Vacillation (referencing Hamlet).

David Baldacci’s Deliver us From Evil is not a prayer book, but a filler. 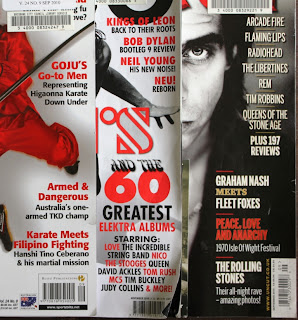 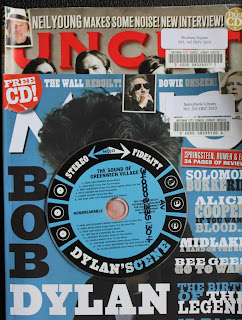 The latest issues of Uncut and Mojo feature Neil Young with 'Le Noise', and Dylan with the latest of 'The Bootleg Series (Vol 9)'. These magazines also have free CDs. 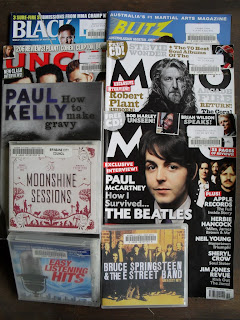 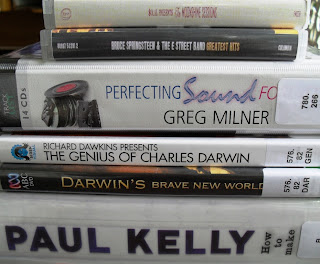 
Some viewing over Christmas, if you’re somehow bored of watching Santa Claus movies. 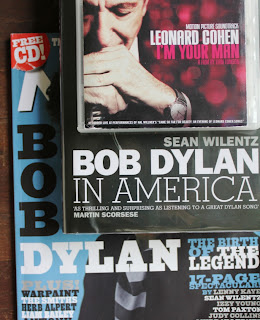 And when you’ve gone through the lot, you can settle down again and enjoy the choice selections and relax to the Leonard Cohen tribute I’m Your Man soundtrack. Or maybe put on Mojo's CD on Dylan’s Greenwich Village scene in the 60s, while reading about it all in Sean Wilentz’s Bob Dylan in America.

Now, all that remains is to tell the 'new year' to take its time - that there's no rush in coming.
Posted by Igorotoz at Sunday, December 12, 2010 No comments: