Last month, a few days before the Australia Day long weekend, I drove up to South-East Queensland to commence on a new work assignment. I cannot say much more due to client confidentiality. Suffice it to say that I'll be delivering to some Port Authority for a week or so. And  soon as that's done I will be on to the next job.
I am at present deep in this big job which involves a tunnel project linking the Southside of Brisbane to the Northside. It is called the North-South Bypass Tunnel or NSBT.
To keep me sane during these next few weeks, I packed my mobile bookshelf with books to while away the time. 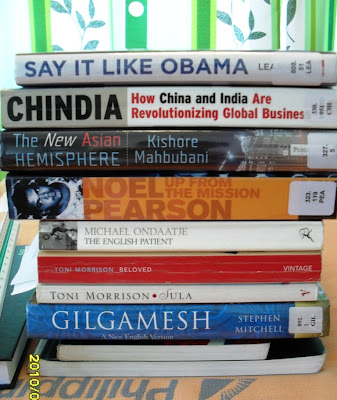 Noel Pearson. Up from the Mission.
Pearson is an Aboriginal lawyer and activist. This collection includes essays, columns, position papers and speeches; and which analyse issues of land rights, alcohol abuse, state welfare dependency, and responsibility. Pearson takes a swipe at various sectors including politicians whom he accuses of being blind to the real issues due to their obsession with staying in power; and at Indigenous Australians who he says adopt the stance of victims, and abrogate responsibility. In “Our Right to Take Responsibility”, he writes of the need for Aborigines to face up to reality. Pearson might as well be exhorting all Australians, and everyone else for that matter. He does not mince his words and sometimes comes across as nasty, but he is always passionate, inspirational and intellectual.

Michael Ondaatje. The English Patient.
This is the story of a nurse at a military hospital in Italy and her patient, and two other characters. This is a narrative of interconnected and non-linear events but which are examined in detail. The book was made into a movie. It’s on some lists of great works of fiction.

Stephen Mitchell. Gilgamesh.
Gilgamesh was written a thousand years before the Iliad and the Bible. This is a very readable and entertaining version that one can finish in one sitting (or one lie-down in my case). The author uses “a loose, non-iambic, non-alliterative tetrametre...”, which I like. I also like that it refers to existing translations. The biblical story of Noah and the flood is very similar to one in this ancient Babylonian tale. This has apparently disturbed some Christians.

Toni Morrison. Beloved.
Nobel Laureate (Literature 1993) Morrison was a voracious reader as a child, and this influenced her storytelling and writings. This appetite for reading must have done her good as her books got nominated for and have won various awards. Beloved is a huge critical success. In 2006, in a poll conducted by The New York Times, it was named as the best American fiction of the last 25 years. The novel portrays the lives of an escaped slave and those around her. The story of the main character makes us reflect on the meaning of our desire for freedom, or of a parent’s love for a child. Other themes explored by the novel are: history, manhood and the impact of slavery.

Shel Leane. Say it like Obama.
Leane illustrates how Obama uses techniques such as alliteration, mannerisms, rhetorical and non-rhetorical questions, body language, links to personal life, and many other methods. But the key of course is confidence – with a capital O. A reviewer of this book said that reading Obama’s speeches made her feel proud to be an American, after she got so jaded during all those Bush years.

Businessweek. Chindia.
The term Chindia, now in popular use, is credited to Jairam Ramesh, an Indian politician and Minister of State. This book combines reports and various commentary on the complementary economic strengths of the next economic superpowers China (manufacturing and infrastructure) and India (IT and services). It discusses cultures, economies and practices, as well as the megamarkets and the future of trading, manufacturing and investing in those two countries. It is a good reference for the afore-reviewed ‘The New Asian Hemisphere’.

Kishore Mahbubani. The New Asian Hemisphere
Click below for review.
ramblin' on

And when the above set starts to get boring, I can indulge in some dog-eared books below.
I drove past the Brisbane convention centre on the way to this job, and saw that there was a book sale on there. 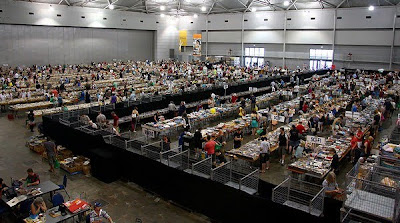 Not one to miss a chance at a good bargain, I popped in for an hour or so and picked out this pile from amongst thousands of books. 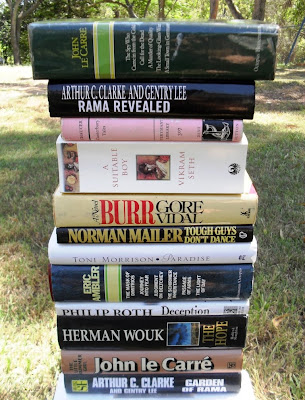 This collection purchased at a reasonable bookstore would add up to $300-$400 easy. Poor poor pitiful me managed to come up with $30 ($35?) for the lot. One can get them cheaper at garage sales, but you have to find time for those.

I have read most most of these before - or maybe I've read most of the authors here before - something like that. A few excellent reads here really. If you persevere with the thickish Vikram Seth book, it's quite wonderful.
Ye bookworms would be familiar with all the other books, go on read them again.
wanna swap?
Posted by Igorotoz at Thursday, February 04, 2010 No comments: