11/09/11. 42,500 people entered the 2011 bridge to Brisbane 5km and 10 km fun runs. They can't be wrong. The race started from the south end of the gateway bridges (Sir Leo Hielscher Bridges) and finished at Brisbane's ekka grounds.

It was a windy couple of days leading to the 15th running of the bridge-to-Brisbane last Sunday. There was even some good rain on the Friday though you wouldn’t know it come the afternoon. I went for a little jog that evening and most of the rainwater had evaporated or got absorbed by whatever kind of sponge was in the ground.  There were no puddles or mud. The land was still as dry as the previous winter long.

Saturday was quite windy too. I stayed indoors mostly except to buy the paper and some milk and food. It was blowy well into the night on the eve of the b2b funrun.

The morning of the race was cold as expected and I rugged up in some old clothes worn over my running gear. I drove to Bowen Hills arriving there around 0445h. The streets looked deserted except for some nightowls, nightshift roadworkers, midnight volunteers and earlybird runners like me. Most of the parking spaces have already been taken, so I drove around for a bit looking for a spot to park. I then joined some runners heading towards what i thought was the train station – for the train to the start line. The group was actually going to the shuttle buses – they obviously had pre-paid tickets – i did not. When i realised this i backtracked quickly, entered a no-through-road or two, before finding signs to the trains.
At the platform, I joined other runners, more than I was expecting to see, trying to keep warm – waiting for the next train to Murarrie, to the start line at the south end of the gateway bridges.
The 05:05 special train (b2b event only) from Albion was already quite packed when it pulled up. We packed it to capacity in Bowen Hills. The train picked up some more runners from Fortitude Valley and Central Stations, but is was SRO from there and all other stops to the Murarrie terminus. Many other runners were forced to wait for the next special train, some five minutes behind.

From the Murarrie train station to the start was a good 750m or so. I jogged and walked briskly to warm up. My watch said 05:50 so I hurried along around and through the crowds of runners.
I quickly threw off my old jacket and trackpants into a donation collection bin before joining my race starting zone, just as the starter set off the wheelchair racer – i think there was only one. I noticed some green and yellow, even grey-bibbed runners, in the red zone (blue zone = elites and sub 40minutes, red = sub-50 minutes, green sub-60 minutes, yellow sub-85 minutes, and grey are walkers). Maybe these sneaky runners are world class, but what about the rules? There would be chaos if no one followed them.

Just before the race start at 06:10, the greens were allowed to join the back of the reds. And then the show got on the road.
Every participant in the bridge-to-brisbane run has a story. Mine is a twice-told tale. I’d like to tell it for the nth time, but it would be just a rehash of excuses, a sorry tale of woe. I even saw that thing that really gets my goat. It was a variation but the sign on the back of this girl’s shirt read: ”I train like a girl.” And she runs like a 'girl' too. I mean it’s fine if she was behind me, but she was speeding past me like a train, as if i was standing still! Ban those shirts.

So anyway I somehow did a PB for this event. I was thrilled that I finished about a minute under my best from last year's bridge-to-brisbane. The extra few days of preparation must have helped. I got back from the gasfields nearly three weeks before the race. I even managed a couple of runs back in camp. Now there’s a story I can tell. From my tales from a suitcase. 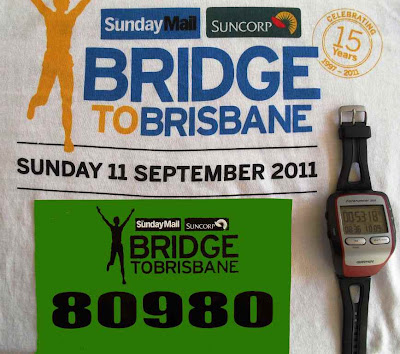 Sidebar.
Running around camp one day, this pretty young woman intercepted me. “Hi. Can I run along?” Her name’s Kathy, from the Gold Coast. She is with the camp management staff. She said, “I saw you jogging around and I thought that I could keep up with you.”
She of course meant I was slow enough not to leave her behind. The lap around the camp is about 950m, and I’d already done a couple and was panting and gasping about to give up, when Cathy hailed me.
It took me a good few seconds to get a reply out, “please do.”
We ran around for a couple more laps and between panting and catching breath, I tried showing her the route. Some of the young fellows around the camp looked up admiringly as Kath and I jogged along. I told her, “Do you know about the emu that roams the territory around camp?” Katie nodded, "Yes." That's all I got for chit-chat. Emus.

There are rough surfaces around the fences of the camp that should be avoided, and I told her not to go there. Actually Cath did most of the talking while I was busy catching my breath and keeping up with her. The route was indeed a little rough with rocks and holes and even damp spots. Mostly we ran side by side but I had to concentrate on the curves in front of me when we ran along in single file, Kathy in front of me  – yes those paths are curvy, I almost stumbled a couple of times. Most of the pipeliners are males, and I asked Cathy, “Does your boyfriend mind you working here where it’s mostly males?” I think she’s on a 2-weeks-on, 1-week-off stint. She answered plain and simple, “I’m single.” I went quiet for a bit. She asked me, “What do you do?” “I do deliveries” I replied, "I can deliver." Kath looked at me with a whodoyouthinkyou'rekidding look and said, “I want to be a truck driver. I want to drive one of those big mining trucks with wheels bigger than a 10-storey building.” So much for boys and toys. Katie’s going places I think. Anyway she got bored with old slow me, and begged off after another lap. I plodded along punishing myself. The boys raised their eyebrows. One asked, “Where’s your new friend?”. I had to admit that Cath dumped me after a couple of laps. “She said I’m too old and too slow,” I said.

Another time, I ran into Therese from the Sunshine Coast. She’s into walking, a lot. I asked to join her one evening while she was walking around the mini-oval. I met Therese a few weeks before at the projects office, or maybe the staff room. She’s an environmentalist. I asked her, “How do you get so slim and all.” She looked at me with a ‘don’t be a smartass’ smile, and I smiled back and said, “Just trying to make some small talk.” Therese started talking about her kids, and which school they went to. I thought so much for small talk. She bid good evening and I was by my lonesome self yet again. Story of my life.
There’s a few other women who work in the gasfields and in camp. They are all beautiful lovely ladies. Especially after a couple of weeks, and one drink too many. But one can only take so much rebuff... Two more sleeps and I’ll be home – to train for the bridge-to-brisbane...

Too much digressing there Martin.
Map of the route below. The run is from east to west. 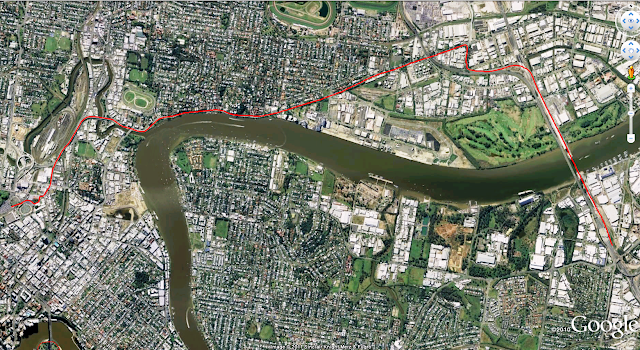 All the 42,500 entrants are the winners in the bridge-to-Brisbane. They have taken massive strides toward better health.
Keep up the running, and have fun.