I heard about this running event going up a mountain: the 24km fatass trail run to Mt Nebo.
"That’s for me," I thought. Coming from the Cordillera mountains, anything with ‘mountain trail’ sometimes piques my interest. The event was scheduled for the 27th of December. Good to sweat off some of the extra weight I had put on during Christmas.

The previous day (boxing day) was quite warm. Even until late in the night the heat was still there, and I could not get to sleep until after midnight. Sometimes mountain runs make me anxious. It shouldn’t though because I race mainly with city slickers/ runners from the big smoke. Yet one of the mysteries of my running life that I’ll never understand is how everyone goes faster than me. Maybe i’m getting soft and slow in my old middle age. Maybe they're just slick.

On the day I turned up early and eagerly for the start at around 5:30am. I joined the group gathering at a makeshift carpark on the grassy verge of the junction of Payne Road and Dillon Road in the suburb of The Gap. 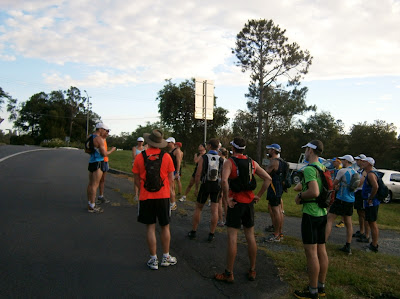 The sight of these battle-hardened elite mountain runners was very intimidating to a newbie funrunner attempting his first run up Mt Nebo. I said hello to a couple of familiar faces and met a few more runners who posted in the coolrunning forum for this run.

This run is along 'south boundary road' in the southern section (formerly Brisbane Forest Park) of the 36,000-hectare D’Aguilar national park. This national park in Brisbane is the only park this large just 12 km from the CBD of any Australian city.

Some 20 to 25 runners turned up for the run. A couple of the veterans gave instructions and directions for the route. Others kindly dropped off water and drink replenishments up along the way, and at the end of the route, 24 kilometres away in Mt Nebo. And as we started it was then that the real difficulty of this run hit me. It wasn’t just 24k, it’s a full 48 kilometres up and down!

It was too late to organise a lift back so I thought of doing 12 or maybe 15km and then walk back. That was the plan. And it was a good plan - at the time. Good I had all day. 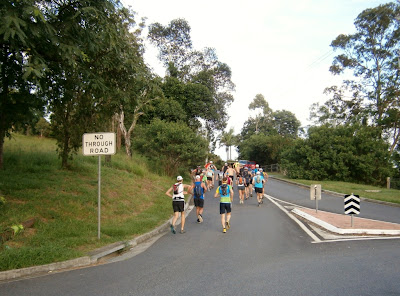 The folly of the plan immediately laid itself bare. First of all, this was the first time i had to run with so much extra weight on, and not just from indulging excessively in some rich Christmas fare. I had a 2-litre hydration backpack. On top of this was two 250ml smaller bottles (one with water carried in hand, and the other with juice in the pack), a digital camera, mobile phone in belt pouch, energy bar, gel pack, electrolyte sachet, extra pair of foot pads and socks. Everyone else had packs on, but I bet I had the heaviest. And they’re veterans, I’m just new at this. And this was not a stroll on some paved path down the road to a park. This was a mountain run with an elevation gain of some 450m (1225m ascent/775m descent) over at least 20km.

The start was okay. I plodded along and settled into my pace. But almost immediately started panting and sweating profusely. 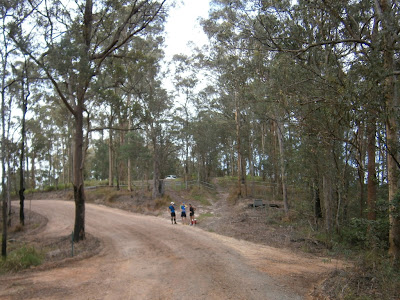 Craig a very coolrunner, kindly stocked up an esky with plenty of ice and water at the 6km mark off Hillbrook Road. I thought I was okay for water so I just left an empty 250ml bottle for when i got back. Soon I got to some familiar trails, part of the Pinnacles classic last April. I did not really recognise too many landmarks of the 4km or so trails common with the pinnacles route, but that’s how it is with running.  When running in a race, you’re usually simply intent on putting one foot in front of the other, and not notice too much of the surroundings. But at about the 8- or 9-km mark, I could only walk up the ascents. And so from about one-fifth distance I walked the uphills and jogged the downhills of the rest of my eventual 40km journey.

Craig was waiting patiently at the 14km mark to make sure we didn’t take a wrong turn towards lake Manchester in the south. He also advised to take a left turn at a shed near the 17km mark on Scrub Road.

I noted all the instructions at the race start but thanks indeed for responsible people like Craig. This being a fat ass event, he did not have to worry about directing other runners and providing water for them, yet he did, so good on you mate. May your tribe increase - at a fast rate.

At the start of the race I ran with Keith who I knew. He did not seem too well and gave me a handicap start. I then tried matching it with Nikki, but after a couple of kilometres I could not stay with her, so I told her to go for it. I then alternated with a couple of speedy ladies who were not impressed with me pretending to sprint past them once or twice. They eventually got so far ahead of me and left me to my own battles with just the serenade of the bellbirds for company.

I managed to keep pace with Jeff/Geoff for one or two kilometres before he scooted off into the rainforest where now we are deep in. Boombana is a dry type subtropical rainforest with eucalypt woodland commingling. 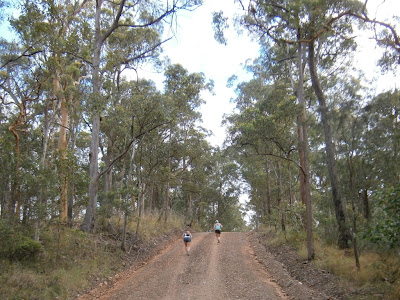 Chris and another runner went past me at the 17km mark. Then the backmarkers also eventually caught me near the 18km mark, and so I brought up the rear as usual. The reluctant rear guard was put in his place, on his post and on his own again.

I kept an eye on my watch to just past the 20km mark, at a junction in the tracks on 'township break' where I stopped, rested, then turned back.

My outward run/walk took almost 3 hours which was fair enough going generally uphill, but the return also took about 3 hours! 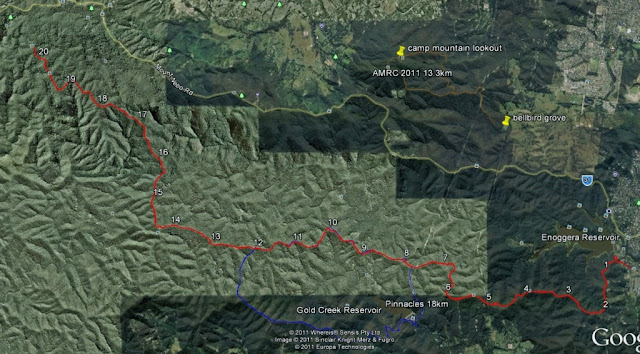 Just after turning back I met Keith who kept on soldiering on though he was obviously not well. He wished me the best of 2012, but really he should have stayed home. Dare I say it but Keith is the epitome of a runner – of the never give up kind. I simply said ‘see you later’. 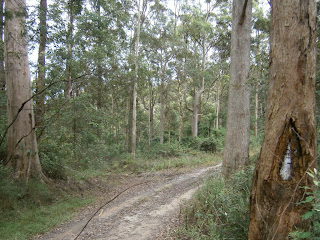 On the way back I did take time to look around and about. I even took a few photos. I wasn't resting, no.

Somewhere down the road, a girl runner went sprinting past me a like a gazelle. I believe she won the race if anyone cared to note. A few minutes later, another runner (male with his shirt off) went scooting past. And then at the 12km mark, I was putting on my extra pair of foot pads when a third runner  (redshirt) came past asking if I was alright.


See, running’s not always about winning or getting a PB.
Many a runner I met over the short three years I have been running, have always lent a helping hand first and foremost, before worrying about their finishing time. If the general society learned this attitude from the running community, life would be so much better.
So ladies and gentlemen take up running, you’ll unleash the better angel inside of you. And if you're already a runner, you should have this event on your must run list. You'll discover things about yourself.
I was parched and wobbling in the legs but the only way home is down by the trail of aching parts of this forestry road, where nobody's hiding their fears. My body had stopped sweating and I feared dehydrating. Did someone say no fear? I still had a little water left but I was mindful not to drain the pack dry. I have resorted to a walk/jog tempo since the 8km outbound mark (walk uphill jog downhill) and on I walked and jogged. 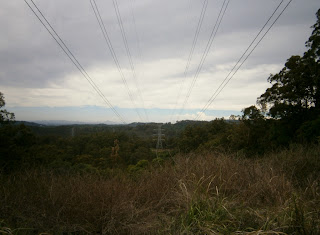 Under the powerlines looking south towards Gold Creek Reservoir. Had I looked north I might have caught a glimpse of Camp Mountain or bellbird grove where I went to watch the 2011 Australian Mountain Running Championships back in May. I was in the box seat, I mean the backseat, way way way back.

Back at the 6km mark off Hillbrook Road, I stopped to see if there’s any water left in Craig’s red esky. There were still two full 600ml bottles buried in ice. I filled up the 250ml juice bottle I left earlier that morning for a cold slaking drink. Ahhhh. And then I trudged on down the road... 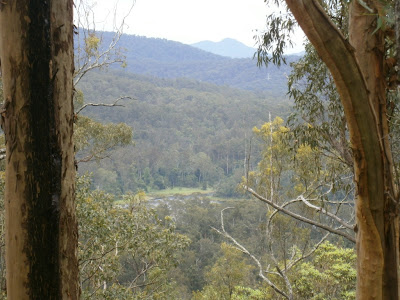 I paused to take in the sights of the Enoggera reservoir now and then and to rest the wearied legs.

I composed a couple of shots of this body of water near the 3km mark. With 2km to go I squeezed out what was left in my hydration pack. I got in a choking fit when I started sucking water droplets into my lungs.

Email ThisBlogThis!Share to TwitterShare to FacebookShare to Pinterest
Labels: Roads of running battles 2011, Trail Runs are a walk in the park