gasfields at the crossroads (gasfields pt. 2)

The Western Downs region is a hive of activity and growth and is among the highest local government performers in Queensland and Australia. Over the past five years the electorate has experienced an increase in population, reversing the trend of rural decline. Businesses have diversified into the energy sector although agriculture, forestry and fishing dominate the economy, representing 22.6% of the region's $1.3 billion GDP. The energy resources sector, which comprises coal, coal seam gas, coal seam gas water, ethanol and power station development, will significantly increase the gross regional product. this growing economy reflects low unemployment figures of 3.1%, well below Queensland and Australian averages.
So one day in Spring i headed out west where the rain don’t fall (sounds like a song – it is a song!)
got a job with a company piping for gas..
Into the sunset we rode – driving towards the setting sun in the late afternoon is a dangerous thing, so we drive carefully, as the goldfields -pardon me- gasfields beckon.


video: up and down the toowoomba range
(this video is like driving up on a fresh January day from Saitan to Baguio on the Zigzagging Kennon Road. the mist on the uphill drive is reminiscent of camp 7 all the way to the BGH in the olden days when there were still pine trees standing) 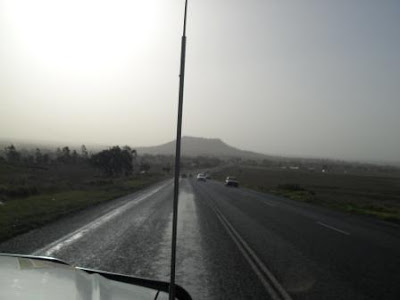 Dairs gold in dem dar - er gas beyond dem hills.
Nestled in the heart of the Western Downs, the Chinchilla district is a small, but thriving community which has progressed from a rural based economy to the now dynamic region where coal and gas exploration and power station development projects go hand-in-hand with extensive feedlots, cotton and broad-acre farming. 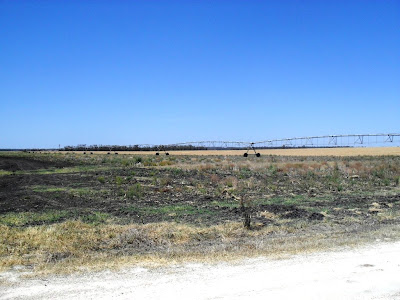 After a stop-over for some supplies (drinks- softdrinks only. oh and milk) in Chinchilla, we continue on down the road south by southwest (sounds like a movie), towards Tara and the town built on the banks of the mighty Condamine. 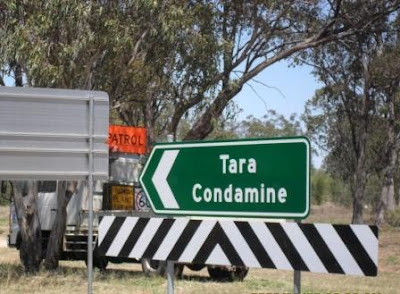 Many of the attractions of the district may be observed just by driving along. These include an amazing variety of bird life and flora. A highlight are the White Gums, either as a lone magnificent tree or standing proudly in a group of three or four, on the dry river beds-

As in the banks of the once mighty Condamine river (here shown in its driest for some time). 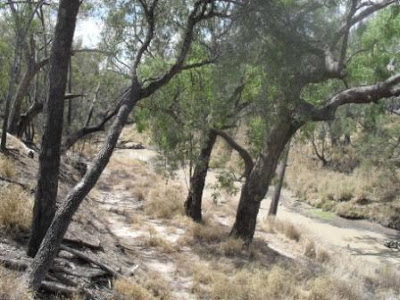 or around the edges of strings of lagoons, which after good rain are transformed into wet paradise for birds and wildlife. 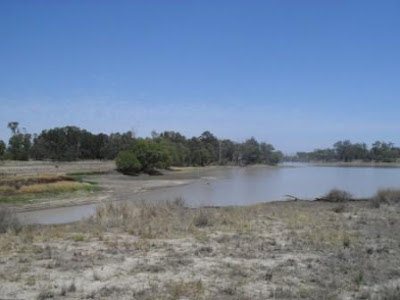 Adding to the diversity are large specimens of Prickly Pear. 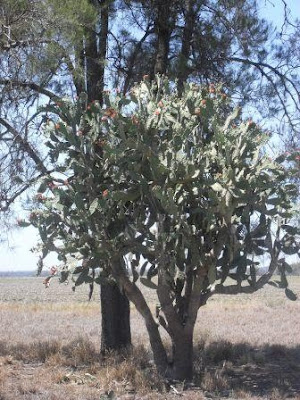 Vegetation ranges from brilliant yellow flowers of the wattle tree to dry spinifex rolling lazily across the countryside. One can come across some of the rare and common flora and fauna.

Along with common trees such as the narrow leaf tea tree, smooth bark cabbage gum, spotted gum and bull oak, Woolly Oak, Budgeroo, Yellow jackets, Broad and Narrow leafed Ironbarks. you will also come across the rare Woollybark Eucalypt. Tall reeds and lush grass surround serene lagoons perfectly reflecting the overhanging majestic blue gums and scented leptospermum. 60 different Wattles found in the district including the rare Hando's Wattle, which is endemic to the area. Black Cypress and the better quality timber producer White Cypress is common throughout the forest areas.
A short journey down the other way will lead to historic landmarks such as the dingo barrier fence.
The Rabbit Fence can also be seen in various locations.

Where we’re headed though is the gasfields.
These gasfields may be on the crossroads, but not at the crossroads.
They’re in ‘The Crossroads’ a locality of the western downs regional council, named after a crossroads. This place is smack bang in the middle of nowhere and bounded by Chnichilla (north), Kogan (east), Tara (south) and Condamine (west). In the few weeks I’ve spent here, and I travel up to 100kms a day, I’ve only seen the two or three homesteads.

One can see many more road trains than houses. Here they're in a convoy - a conga line to Condamine he he. 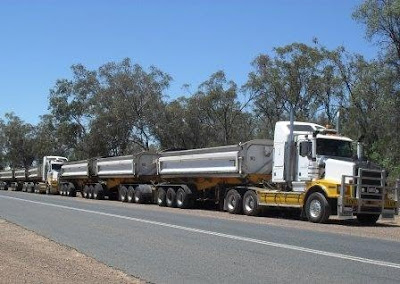 These are the ‘shorter’ road trains – only 36m long.

Chinchilla is ideally situated in the middle of the Surat Basin - a coal-rich area that stretches from Toowoomba to beyond Roma - and for the past three years has seen major growth and development.
A number of energy companies are active in the areas surrounding Chinchilla in their quest for coal seam gas for use in gas-fired power stations, as gas suppliers for the domestic and export markets, or for gas-to-liquid projects.

These companies are all major players in the energy industry.

Some of the place names under exploration and development around the vicinity of The Crossroads have strange sounding names: Argyle-Kenya, Berwyndale, Tipton West, Daandine, Braemar, Talinga etc.

So where are we staying? The Condamine bell? 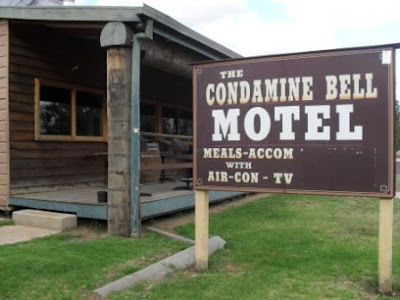 No silly that’s just for a drink, we’re booked in camp.

Too much gas talk Marty. let’s get back to work.
Okay that’s a job pre-start meeting. 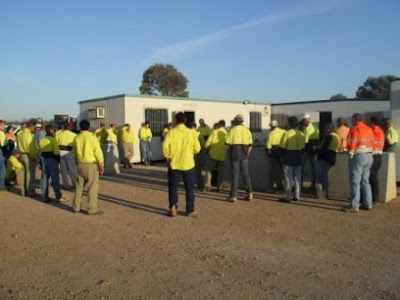 Have we signed in yet? No cos i might get a random blood-alcohol test.

Following the pipeline crews can be a tricky business.
One time we tagged along behind cultural heritage officers. These are usually local aboriginals.
They showed some of the stone artefacts they were collecting. 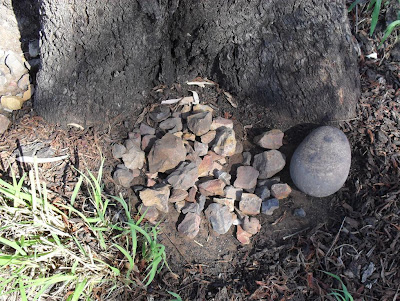 Here’s one such collection under a scar tree.
(A scar maybe from the taking of the bark to make canoes and coolamons, marking out a boundary area, marking a sacred burial site or other traditional purpose.This is very significant in that it defines Aboriginal occupation of Australia for over 40,000 years. Scar trees are evidence of native title and helped demolish the concept of ‘terra nullius’). 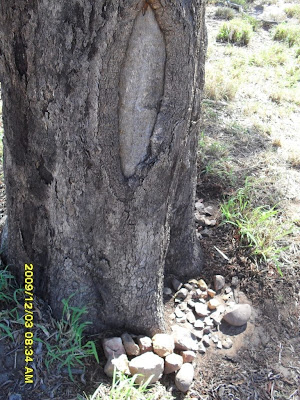 And why are they collecting these artefacts? 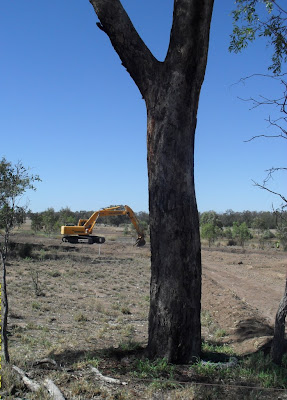 Because these gasfields are identified Aboriginal cultural heritage areas and they are under threat by pipelines and the machines that come to dig them up – all in the name of development - to keep this fuel hungry world running.
Until our climate has changed enough to incinerate us all to kingdom come.
But if we keep denying it enough, maybe climate change is a myth.

Hey i just work here. What would i know about anything.
All right check it out then. Stand on that post Mr Postman. 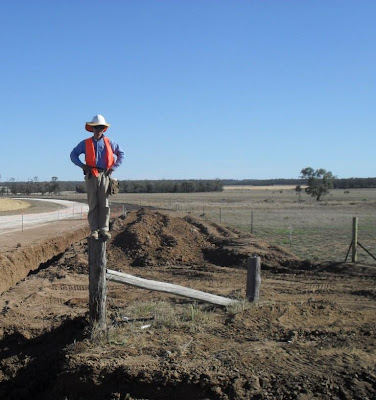 Now tell me is the earth warming or not?
Dunno but the pipes are heating up.
They’re expanding. 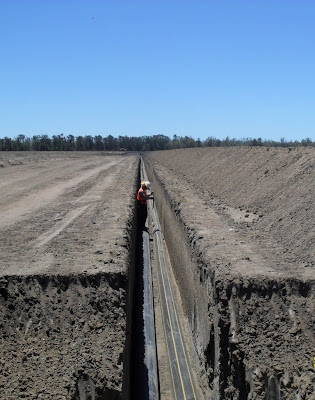 
If you've never seen anyone split open 40 watermelons in 60 seconds using nothing but, well... their own melon, you should probably come to the Chinchilla Melon Festival.
Known as the ‘Melon Capital’ of Australia, Chinchilla produces a quarter of Australia’s melons and celebrates the fact biennially in February.
The big news from the last festival was that John Allwood broke 40 melons with his head in one minute for the Guinness World Record (previous was 36).

Okay shall we go meet some locals.
Locals? Out here? Yep.
We’ve been to Chinchilla, Condamine and Kogan. Let’s check out Tara.
What’s her name's from there - Vivien.
Oh you’re really silly.
It’s Scarlet who’s from Tara.
Okay, she might think I’m Rhett with this moustache.
Not Rhett it’s Clark.
And that's Gable not Kent...

you've lost me Martin.
you truly are a hopelessly lost romantic.
you've come with the dust
and are gone with the wind...
(sounds like a song too).
Posted by Igorotoz at Sunday, November 29, 2009

Email ThisBlogThis!Share to TwitterShare to FacebookShare to Pinterest
Labels: a stint in the gas fields